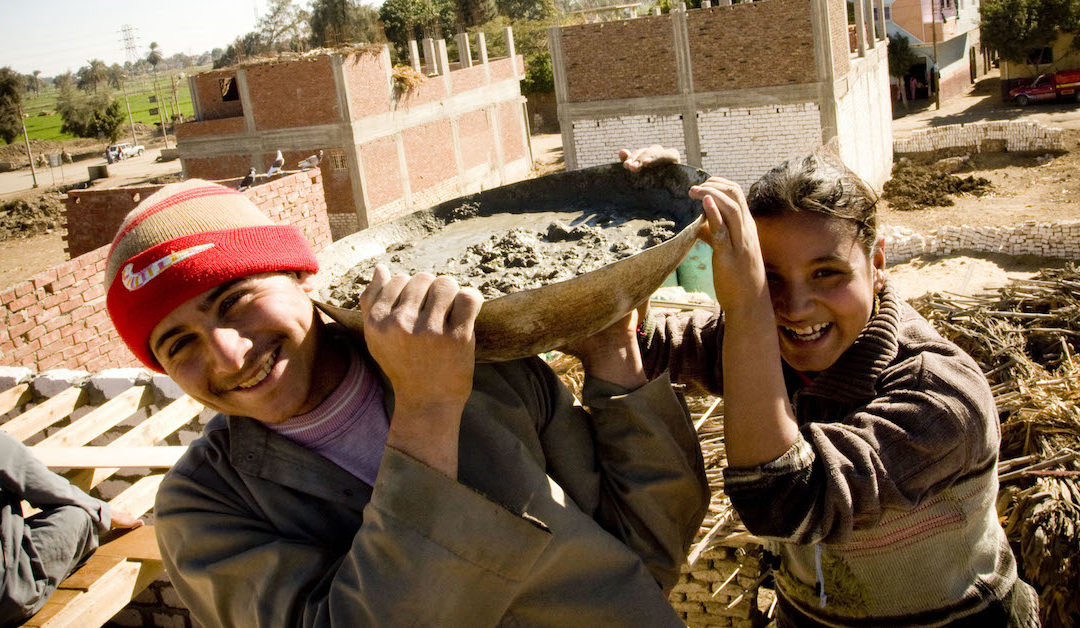 Our weakness proved to be our greatest asset.

In an Egyptian village roasted by the merciless sun, civil engineer Yousry and I sat down on shaded bamboo chairs in April 1999.  A sniffing and wagging session ensued to find out if we could work together.

I’d been asked to found Habitat for Humanity in the Middle East.  Perhaps my skepticism of its prospects in the Arab world was forgivable, given its American profile and Jesus Christ’s name in its legal charter.  But I agreed to visit its only pilot project on Arab soil.

Yousry had turned down a promotion in a premier construction firm in Cairo to join Habitat.  After days with him in garbage-recycling cities and rural squalor, I began to understand why.

It got under Yousry’s skin, too.  “I grew up in Cairo, but I’ll never forget my first sight of poverty.  A family of ten in a two-by-three meter room.  They couldn’t stand upright because they’d built a loft so everybody could sleep at the same time.  Those in the loft had it better; those below slept in beds on stilts in ten centimeters of sewage water.  The next thatch-roofed house was six-by-seven meters, but I lost track of those living there when my count reached 23 – and the father was blind.”

I asked him why he’d walked away from his big career chance for this.  His voice was quiet, but steely.  “I have a dream.  To solve the poverty housing problem of Egypt.”

I wondered out loud, “How do you propose to do that?”

He asserted, “Over twenty million of Egypt’s seventy million people suffer in sub-human housing.  In my lifetime, I’ll help two million volunteers build their own homes, and they will show the other 90% how to solve the problem without me.”

But with no organization legally registered, I knew he could not hire staff.  Nor open a bank account.  Nor sign a single mortgage.

I did some quick math: “Your target is 400,000 houses in 25 years.  Habitat just celebrated building 200,000 houses worldwide in 30 years.  How will you double that impact, in less time?”
His answer pinpointed the paradoxical power of weakness.

“An Egyptian proverb says, ‘The basket with two handles is meant to be carried by two.’  There are over 17,000 nonprofits registered in every corner of Egypt.  We’ll team up.  Alone, we’re weak.  Competing, we’ll fail.  But together, we’ll succeed.”
I figured if I could help just this one guy achieve this dream, it’d be worth five years.  So I signed on.  Habitat’s traditional organization model was stopped cold right out of the starting gate.  The bureaucratic legal registration dragged on for over four frustrating years.

That headache was a gift in disguise.

Weak, we couldn’t go it alone.  So we cultivated friends.  And explored networks.  We assessed values alignment.  And trusted volunteers.   We forged collaboration.  And empowered allies.

And then we jumped to get out of their way!

The exponential curve of families housed started climbing.  What began crawling at under 30 homes/year in 1997 gained momentum until 25 strategic alliances and entire communities of families together built over 2000 homes/year in 2007.  So far, over 15,000 Egyptian families have moved into decent homes.

Dignity as God intended is now reality for those who never dared to dream.

Fully 99.7% are repaying loans on time, most from two-dollar-a-day incomes.  That rate held steady in the 2008 global economic meltdown.  Egyptian villagers faithfully paid back while the world’s mightiest banks begged for mortgage crisis bailouts.

All this on a shoe-string budget with nine staff.

I’d worked myself out of a job.  And by then, I’d bumped into other dreamers like Yousry in even harder places.  Insiders with the right values.  And the right dreams.

I pondered how to strengthen them.

An intriguing article1 caught my eye as I bid Habitat farewell in 2005, headed to Harvard to research the keys to impact in even harder places.  On arrival, I phoned Jane Wei-Skillern, a business professor researching networks.  “Could we meet?  I’ve just lived a story that confirms your findings.”

But Yousry is not an isolated example.  Wei-Skillern and Marciano’s field research demonstrates that “networked nonprofits achieve their mission far more efficiently, effectively, and sustainably than they could have by working alone.”3

Among practitioners and academics alike, the insight that networks trump organizations is gaining traction.

The findings of Stanford MBA’s Brafman and Beckstrom support their striking metaphor that likens centralized, top-down organizations to spiders (which die if beheaded) – contrasted with adaptive networks that function as starfish (which regenerate when cut up).4 Similarly, social development researchers Taschereau and Bolger affirm that networks generate synergies: “In networks, 1 + 1 > 2.”5

But as Yousry and I had learned in the trenches, effective networks are anything but haphazard.  When mapping network emergence stages, practitioners Krebs and Holley spotlight the role of “network weavers”, informal and active leaders with “the vision, the energy, and the social skills to connect to diverse individuals and groups and start information flowing.”6
Networking stems from a growing realization that our problems are far bigger than any one organization.  Wei-Skillern and Marciano conclude that because “most social issues dwarf even the most well-resourced, well-managed nonprofit…it is wrongheaded for nonprofit leaders simply to build their organizations.  Instead, they must build capacity outside of their organizations…focus[ing] on their mission, not their organization; on trust, not control; and on being a node, not a hub.”3

The Bridgespan Group in Boston advocates collaboration across organization lines to build strong fields for scaled impact.7 Similarly, at Oxford, Hartigan promotes the “critical need to scale to the issues.”  However, this requires “giving up ownership of the issue, which can be difficult given the existence of egos, and…the reality that donors and investors drive organizations to differentiate themselves from others doing similar work, increasing fragmentation.”8

This preoccupation with ego is decried by Krebs and Holley: “if two or more community development organizations start battling over turf and control of the community then the result may be two or more competing…networks that ignore the larger community need and just focus on the survival of their own network.”6

Impact requires servant leaders to set aside ego to serve the common good.

Dreams InDeed is committed to serve as network weavers with visionaries in hard places.  But talk is cheap.  And egos resurgent.  So we’ve learned that we need to live our core values – passion, humility, wisdom, faith, and integrity, as modeled in the life of Jesus Christ – to effectively embody this role.

Like Yousry, we aim to catalyze change that multiplies far beyond the visionaries with whom we have immediate contact.   He doesn’t aim to become a social entrepreneur rock-star.  He aims to see the last family on his waiting list move into a decent home to live in dignity as God intended.

And he’s getting there.

Why?  He chooses to put the last, first.  And the first, last.  That’s how the whole becomes more than the sum of the parts.

7 The James Irvine Foundation and The Bridgespan Group (2009), The Strong Field Framework: A Guide and Toolkit for Funders and Nonprofits Committed to Large-Scale Impact, June 2009.  https://irvine-dot-org.s3.amazonaws.com/documents/64/attachments/strongfieldframework.pdf.
8 Hartigan, Pamela (2008).  Scaling to the Issue: The Way Forward in the “Phoenix Economy”, Harvard Kennedy School Center for Public Leadership, December 9, 2008.